With ample help from Medievalists of Color, I organized the “Inclusivity and Diversity: Challenges, Solutions, and Responses” panel at the annual meeting of the 2018 Medieval Academy of America (MAA), and I wrote proposals for new initiatives to enhance diversity at the MAA.

As I reflect on the 2018 MAA annual meeting and the “Inclusivity and Diversity” panel, I can’t help but think of the conference through the Old Irish term ingnáth, which we often translate as “strange” and “unfamiliar,” but also as “wonderful,” “remarkable,” “unusual.”[1] In Serglige Con Culainn, Lóeg (Cú Chulaind’s charioteer) uses ingnáth to describe the Irish Otherworld.[2] He describes it as “bale ingnad cíar bo gnád”: “wonderful though not unknown” (eDIL).[3] But the range of meaning of that sentence is extensive: why not translate as “unfamiliar but familiar,” “wondrous but well-known,” “strange but customary,” and so on? The conference and the panel were moments of familiarity, innovation, and estrangement. Just like your standard trip to the Otherworld.

The Otherworld seems a wondrous place to those invited and welcomed in, but when heroes such as Lóeg, Cú Chulaind, and Arthur enter uninvited, it can be monstrous (and so can the heroes).[4] And, in many instances, this is how conferences in medieval studies feel to me. I never know if I am welcomed and whether the experience will be a wondrous positive adventure in which I meet colleagues and enhance my own learning, or if I am seen as an intruder and will experience monstrous racist encounters in which I will be treated like a Beserkr that needs to be avoided or appeased at a moment’s notice; and then the conference will feel like I am trapped, surrounded by formidable enemies. I am happy to say that the MAA was very welcoming, I was given funds to be able to go, and I felt that my contributions to the MAA where acknowledged and desired.

But ingnáth is not just about estrangement and unfamiliarity; it also about seeing things you know become transformed into something else entirely. I have been living in Puerto Rico since July of 2017 and Hurricane Maria changed my life in 48 wintry hours (my husband talks about it here). The day before the storm, I sent Dr. Lisa Fagin Davis drafts of the proposals for the initiatives mentioned above (the Inclusivity and Diversity Committee, Belle Da Costa Greene Award, and the Diversity and Inclusivity Travel Grant) because I imagined that the communication systems were going to be unreliable for a while. I was not prepared for zero contact for the first few weeks, four and a half months without electricity, and the constant loss of phone and internet signal that continues to impact us.

Nevertheless, going to Atlanta, to a hotel full of medievalists, seemed so much stranger than the changed landscape of my Puerto Rico. Going to a medieval conference where the CARA plenary talk was titled “Medieval Responses to Natural Disasters” was more like the Otherworld than experiencing a natural disaster, even if listening to the paper about medieval floods caused me to flash back to trying to stop water from pouring into my home while 37 weeks pregnant. I felt a sense of kinship with one particular description, from a medieval source, of the destruction that flooded rivers can cause. In Atlanta, I felt myself to be in the Otherworld—a place strange and familiar but not real, an illusion. I felt strange and unfamiliar: the MAA was an Otherworld, but friends and colleagues everywhere were asking about my wellbeing and were worried about my family.

Strangely enough, the framing of the MAA Diversity and Inclusivity panel itself exemplifies this duality. Throughout the panel, I introduced my colleagues who would then stand and give their papers. The panelists and I were sitting down on a long table, and on the background an image was displayed on a screen. The image portrays a woman running at the beach; it is the exact same one in my own computer screen at home. I have never been front and center of such a well-attended event, and yet it was framed by an image I look at every day, as if the attendants of the panel could see what I see every day. Wonderful though not unknown, indeed! 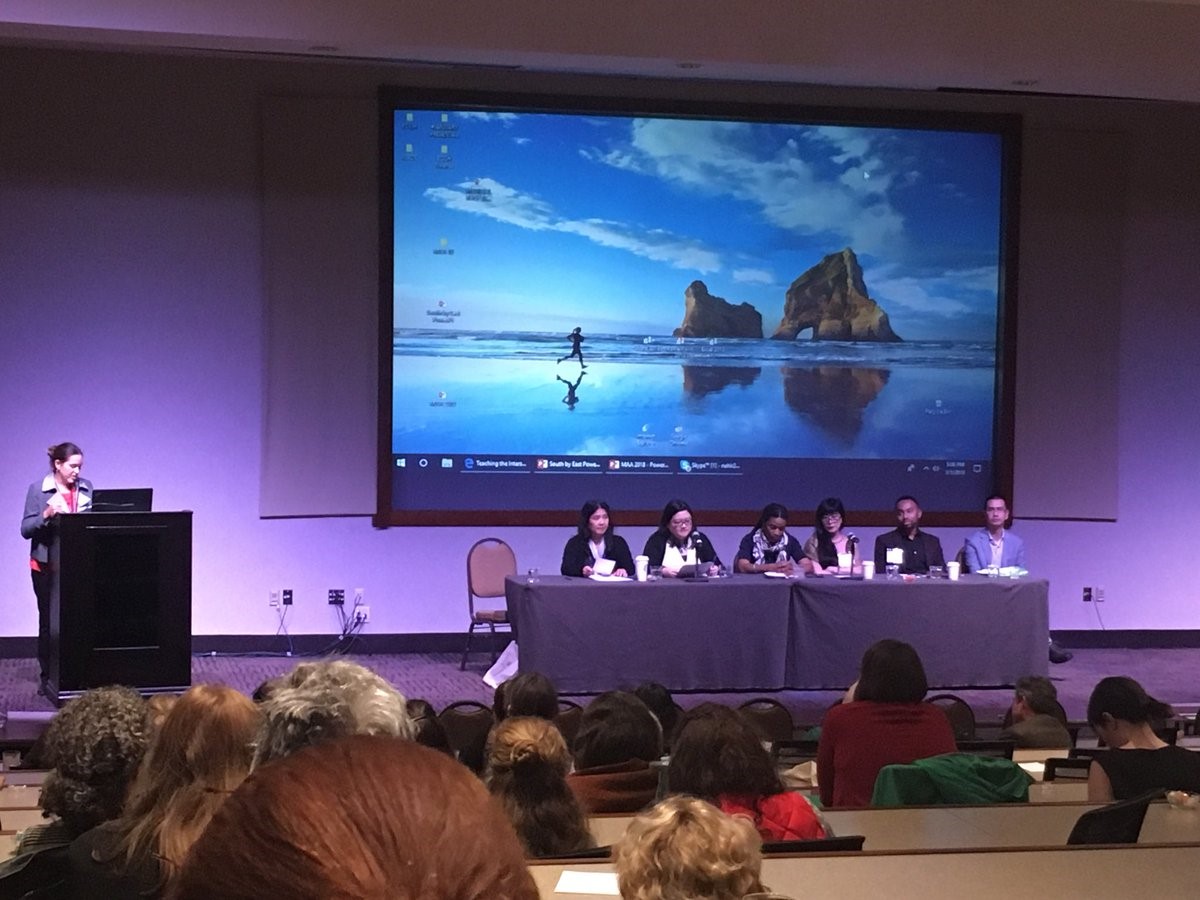 (Picture of me introducing the Inclusivity and Diversity Panel at the 2018 MAA with image of women running at the beach.)

The conference organizers described the panel as innovative, the first of its kind in MAA history, and suggested that part of the innovation of the panel is that it reminds the MAA membership, especially the old guard, that medievalists are human. That we are not just scholars; we are human. The pronouncement was meant to encompass all of the membership, including me and Medievalists of Color, but I think it was especially meant to encompass those that are still learning to cope with the rapidly changing landscape of medieval studies. Suddenly, medievalists are being held accountable to push against the appropriation of the Middle Ages by white supremacists, and many well-meaning medievalists are afraid to make mistakes because they have never had to think about their jobs as potentially harmful. But to a woman of color whose humanity has been questioned in different contexts, who writes from Puerto Rico where our right to dignity has been questioned by a government that refuses to see Puerto Ricans as human, the proclamation that the panel was about reminding everyone of our humanity had very different connotations.

Dr. Cord Whitaker’s talk was poignant for me in this regard. He asked that we imagine ourselves in a tropical paradise lounging on a chair reading Chaucer. The image resulted in laughter, seemingly too bizarre to imagine the possibility as something other than a joke. And I laughed because I understand the conventions and I knew that it was time to laugh. But what happens when a room full of your peers, colleagues, and mentors laugh at your reality? I am Puerto Rican, I grew up in the mountains of a tropical island, and I would read by the beach. I read Chaucer for the first time by the beach (and in Spanish). I read Arthur by the beach. I live in complete certainty that most medieval Irish people would have loved to lounge by the beach with me. The oceans of my island would have been a welcomed Otherworld to them even as it is a certain reality to me.

It seemed that my lived experience was unimaginable to a room full of medievalists. But Dr. Whitaker knew that laughter would come and he used that laughter to point out that we should search for the Middle Ages in those places that we imagine empty of the Middle Ages. That just because we cannot imagine Chaucer inhabiting the tropics, does not mean that he doesn’t already live there. And just like that—in a new defining moment, a moment of shared humanity—Cord turned the unimaginable into reality and gave value to my lived experiences without even realizing it. And suddenly the MAA was not the Otherworld, medieval studies was real, and I was real in medieval studies.

Each speaker created such a moment for me. Their discussions were wholly theirs and yet I recognized myself in them. This is why I went to the MAA and I worked on starting the Inclusivity and Diversity Committee, the Belle Da Costa Greene Award, and the Diversity and Inclusivity Travel Grant; and this is why I plan to be a fixture in the Medieval Academy of America: because I am real, I refuse to be trapped in the Otherworld, and this is how I know to open up the doors.

I will end by noting that I am very proud of these initiatives, especially the new Belle Da Costa Greene Award, which will be granted to a medievalist of color for research and travel. I urge everyone to donate to the fund if they can and help open up more doors.

[1] See the electronic Dictionary of the Irish Language (eDIL) for a more nuanced definition of ingnáth.

[2] I will openly admit that Lóeg is my favorite character. He is the getaway driver of Cú Chulainn, the most famous warrior of the Irish Ulstermen. More importantly, in Serglige Con Culainn, Lóeg closely resembles the fili or “poet” of the Irish stories. He is the first character to access the Otherworld, he tells the other Ulstermen about what he sees, and convinces Cú Chulainn to go there by reciting some masterful poetry. Once Lóeg and Cú Chulainn are in the Otherworld, Lóeg is the only one who can help calm Cú Chulainn’s warp-spasm, a transformation similar to that of a berserkr, before he kills everyone. Much as the fili is a poet, historian, and druid, Lóeg is commanded to fulfill these obligations.

[4] Proinsias Mac Cana describes the Otherworld in the following manner: “Being, as it is ultimately, an imaginative reflex of human attitudes and aspirations, this other kingdom assumes different forms according to the occasion and circumstance, but these forms are not sharply or consistently distinguished. When a mortal visits the otherworld by invitation, it is usually pictured as a land of contentment and joy. But when it is invaded by human heroes—a favorite theme in storytelling and one which is related to Cú Chulainn, Fionn and Arthur among others—then it wears a very different image. It may still be a country of riches and of wonders—and frequently the declared object of such heroic expeditions is to seize its treasures and its magic talismans—but inevitably its status relative to mankind has been transformed: its rulers and its welcoming hosts are now formidable and even monstrous enemies, fit to test the mettle of the greatest hero” (Celtic Mythology, 126).

3 Replies to “Welcome to a New Reality! Reflections on the Medieval Academy of America’s Panel: “Inclusivity and Diversity: Challenges, Solutions, and Responses””

Welcome to the Public Discourse page. We offer this blog as a space that centers the perspectives, experiences, and voices of scholars of color who work in Medieval Studies. While official statements issued by MoC will be posted on our Statements page, this space will be open for the dissemination of individual blog posts: short essays and musings on current events related to the study and/or appropriation of the medieval past. The aim is to foster public dialogue on issues that affect the future of Medieval Studies while maintaining a central commitment to anti-racist practices and epistemologies. MoC’s Editorial Committee will manage the blog without laying claim to the viewpoints expressed here. If you are a scholar of color or non-POC ally who would like to post on this blog, please email us and address your inquiry to the Editorial Committee.

MoC will also use this space to make announcements, share news, and periodically post bibliographies that list new publications by medievalists of color. In serving this latter purpose, the Public Discourse page contributes to the field’s recent movement to decolonize our citational practices. If you are a medievalist of color and would like MoC to include a citation of your scholarship or a link to a public essay you have published elsewhere, please email us  and address your inquiry to the Website Committee.